Zen World is one of the most sought after sound designers and music instructors in this generation. He was able

to amass more than 100,000 followers on YouTube by making music production tutorials enjoyable and easy to understand. Zen World is supported by today's top producers such as KSHMR, Brooks, FTAMPA, Armin Van Buuren, Curbi, Madison Mars, and many more. He strongly believes that music production should not be hard and stressful. That is why he found ways to take the stress away by recreating the sounds of today's biggest dance artists to the hands of the aspiring music producers. That way music producers will be able to solely focus on their melodies and creativty.

GETTING STARTED WITH VOCALOID5

I watched a couple of your tutorials to get me started. I would say about 10-20 minutes of watching them I was able to get the ball rolling. "It was easy to use, as it has a similar layout to many digital audio workstations out there."

I've been experimenting more and more with VOCALOID5. "I have used it on two songs I'm currently working on. It's so easy to use after you put some time into it."

One of the things I figured you can do with VOCALOID are vocal chops. Vocal chops are usually easy to make utilizing only one sample. However, in VOCALOID5, you can create a melody and then input random words or letters that you have in your head for your vocal chop, and it will create these complex vocal chop loops. I see myself making a massive pack of just these in the future for producers to use. Another neat way I have used VOCALOID5 is to create vocal runs for myself that I can later use to develop vocal atmospheres with and develop risers. "I can also see people using VOCALOID in many genres I currently enjoy like Tech House, Techno, Future Bass, Trance, and Future Bounce."

''Many producers will use VOCALOID5 to create their main vocals. I've heard fantastic music from people utilizing robotic sounding vocals, and VOCALOID5 is perfect for that." An excellent example of this is the new track by Todd Helder called ‘Smile.' It employs a very robotic melodic vocal for the breakdown. If producers want to go the extra mile with it, they can develop ad libs that mesh with their vocals naturally. "No need to spend time searching through sample packs for the right vocal-ad lib that fits."

The Dirty Chicken pack is a sound set for Sylenth 1 that is aimed at helping producers create Tech-House in the style of artist like Fisher, Chris Lake, Walker & Royce, and the Dirtybird Label. So if you are making this style of Tech-House, this is the perfect pack for you.The inspiration for this pack came after watching Fisher and Walker & Royce perform at a Festival. I fell in love with the music so much that I decided to create a tool for myself and producers to use.

If you guys are interested in this pack you guys can find it over at www.evosounds.com.

I love to make tutorials and soundbanks that help the average producer make the music that they love. I want my channel to be a place that any producer can come and learn something new for their passion every day. 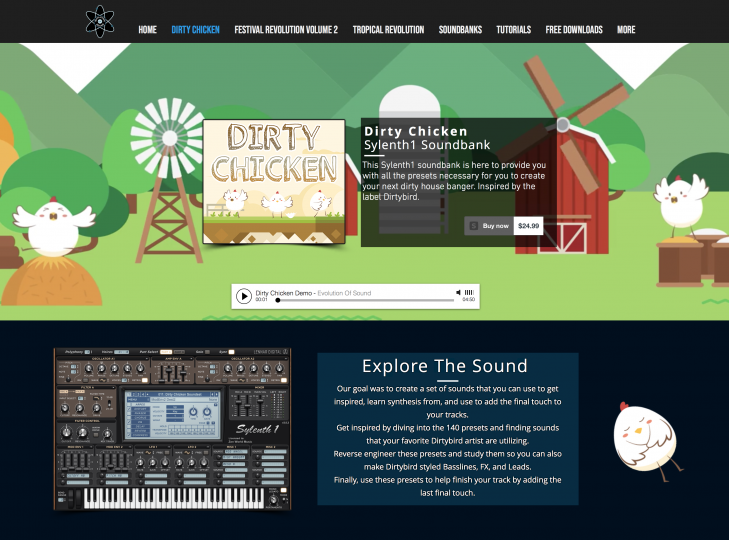 Wisest words for producers that I follow to this day is always to have fun making music and enjoy the journey. So many people try to get good fast that they stop having fun, and start getting frustrated that they don't sound as good as an individual artist. Remember, we all started making music, just like you, and we all have our journey in this world. Make the music you love and make the best of it. "Oh, and use VOCALOID5 for some dope vocals!"

Black Friday sale 2018 is over